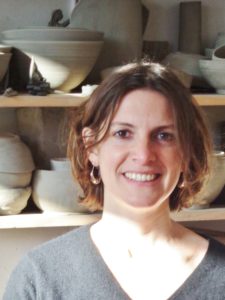 I was 7 years old when my passion for clay started in a craft center in Paris.
This activity soon became essential as well as grounding for me.
I worked with earthenware and practiced mainly coil, slab work and stamping methods.
I still remember helping my teacher to prepare the kiln for firing, and I used to love replacing her in the studio while she was away!
I stayed there for 6 years, then the center closed.

In 1997, I reconnected again with my passion for pottery, with much joy and enthusiasm, through lessons with Dominique Paillard Rampal in the 11th arrondissement of Paris.
I continued to work with earthenware and discovered mixed clay. I stayed there for 3 years, much to my delight!
In exchange for these lessons I babysat her elder daughter. Then Dominique left Paris for Marseille and so I went to another pottery studio.

In 2000, I started throwing with Pétra Bourgeois in Marie France Ponet’s studio.
I discovered stoneware and the throwing wheel: both were true revelations! And they have been with me to this day!

In Summer 2001, I did a throwing and glazing training in the South of France with Julia and Michel Simonot. I discovered colors and chemistry!

My meeting with Patricia Vieljeux in 2001, a potter in the 11th arrondissement of Paris, is decisive. I practised there during 3 years and I decided to become a professional potter.

I started to exhibit and sell pottery for the first time in 2000, and did so successfully till 2004.

In 2004, I went to India to do a pottery training with Mansimran Singh, a great master of Indian pottery who is very well known in the Indian art scene.
I stayed there for 2 months for an intensive wheel throwing training. I discovered new techniques, different glazes and a whole new world opened up…

In November 2004, I decided to complete my throwing training and left for the south of France for two years. I spent part of my time in Bonnieux in Marie-Christine Denniel’s studio and the rest of the time at CFA school in Saint-Victor-des-Oules, working with Hélène Lathoumétie the first year and Jean Lecerf the second, where I got a full qualification.

Then in 2008, I followed a glaze training in Paris with Christophe Bonnard and after that with Catherine Jantet.

In 2006, I organised an exhibition in Paris.
In 2007, I exhibited in Brisbane in Australia
In 2008, I organised two exhibitions and sales. One in Sartrouville and another in Paris. From 2010, I exhibited each year in my studio as well as at Lil’Art, a crafts market in Les Lilas.

* In September and October 2009, replacing the potter Valérie Lebrun at the MJC (youth association) of Colombe,

* In North India in October 2007, with Mansimran Singh students,